Homosexuality is not a disease! 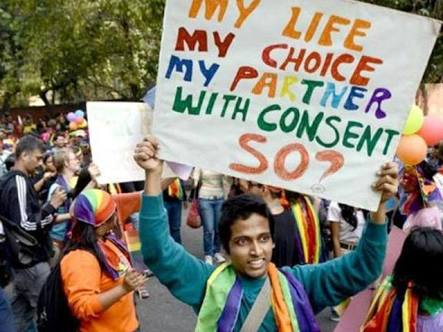 “Vikriti evam prakriti”, which translates to “what seems unnatural, is also natural”
– The Rigved

Section 377 of the Indian Penal Code has been in discussion for quite some time now. The law states that “leaving your natural territory and investing yourself into other places is a crime and are against the order of nature”. Not only does the archaic law create a debatable distinction between what is “natural sex” and what is “unnatural sex”, but also criminalizes sex that it deems “unnatural”; anal sex, oral sex, and sex with a person of the same gender are illegal sexual encounters and are considered a criminal offence in our country. A major part of Section 377 talks about the criminalization of “gay sex, LGBT sex and Homosexuality ”.

A devastating reality is that consensual interactions of such nature are considered crimes far worse than rape.

Blatant criminalization of homosexuality leads to mental turmoil for those exploring their sexuality. They might often question – Is being homosexual against Nature or God? And the answer is, of course, NO. If someone is attracted to a person, they alone should have the choice of pursuing a relationship. The gender of either of those involved should not be a question of scrutiny, let alone legal intervention.

Homosexuality is not a disease.

It is a sexual preference, a desire, a feeling, that is as natural and innocent as any other human desire. Our society needs to understand that homosexuality is not one’s choice or a phase, it’s one’s orientation. Homosexuality is natural. And as a developing nation, India needs to accept this.

Extremist, self-appointed governors and protectors of Indian culture, say that homosexuality is against God. But they fail to acknowledge that every holy book. Take Gita, the Quran or the Bible – preaches only one thing. God is present in everything, in every element, from small tiny particles of dust to enormously ravishing storms, it is present in every creature, in every thought, in every soul. If some of God’s children’s happiness resides in expressing their sexuality, then God will surely not be offended.

Those so-called ‘guardians of Indian culture’ who preach that homosexuality is against Bhartiya Sanskriti should open their eyes and realise that Indian culture is fluid.

It has survived because it knows how to adapt. We banished the Sati system, dowry system, child marriage; these activities, which were once concerned a part of our culture, are now illegal and socially unacceptable. So, why can we open our minds about homosexuality too?

Another revealing fact is that the origin of Section 377 is not rooted in Indian ideals at all; it’s a law imposed on us by the British colonial government in 1860’s. While the British had the sense to scrap this law from their system by legalizing homosexuality in England in 1967. Indians still continue to suffer.

We need to accept that homosexuality has always been a part of our culture.

That’s the reason why we have sculptures and paintings depicting homosexuality at one of our most ancient places. Lakshman Temple  in Khujarao, for example, has intricate sculptures depicting gay sex. This proves that homosexuality was accepted in Ancient India and has always been a part of Bhartiya Sanskriti. It is unfair that those who were a celebrated and embraced community in Ancient India are considered criminals in modern, open-minded, developing India.

The high court of Delhi in July 2009 decriminalized Section 377. The Supreme Court in 2013 recriminalized it. The court said that “amending or repealing section 377 should be a matter left to parliament not judiciary”. But the bigger problem lies deep down in the falsely-glorified, pathetically-hollow, narrow-minded mentality of a major chunk of our society.

Our society needs a massive makeover. “Equality, justice right to live free irrespective of your sexuality, caste, creed or identity”, is every Indian’s fundamental right, so let’s just open up our minds and provide these rights to everyone. For the greatest religion and culture of humanity, we need to let everyone have the right to be free in their own country without being considered a criminal.

The Rigveda – one of the most ancient books of Indian culture – says, “Vikriti evam Prakriti”, which translates to “what seems unnatural, is also natural”.

Let’s embrace this fact with joined hands and open minds, and shout out loud to the Indian judiciary that YES, the Indian society is ready to accept homosexuals wholeheartedly once again.