Economic development and growth are one of the major factors defining the ground reality of a country. To determine this economic growth the measure used is the SPI or Social progress index.

Now a question would be lingering in one’s mind that what exactly is SPI??

The Social Progress Index is an aggregate index of social and environmental indicators that capture dimensions of social progress.

Basic Human Needs, Foundations of Wellbeing, and Opportunity are these dimensions.

The question arises here is that why SPI matters

Economic growth has lifted millions of people out of poverty.

It has improved the lives of much more over the last half-century.

Yet it is increasingly noted that a model of human development based on economic progress alone is incomplete.

A society which fails to notice basic human needs. Make citizens improve their quality of life, protect the environment, and provide an opportunity for many of its citizens. Is just not progressing.

Drawing on 52 indicators of a country’s social performance, the SPI offers a practical tool for government and business leaders to benchmark country performance and focus on those areas where social improvement is most needed.

The data reveals that many aspects of social progress, not surprisingly, tend to improve with income growth.

Now, where does India stand in this SPI battle? 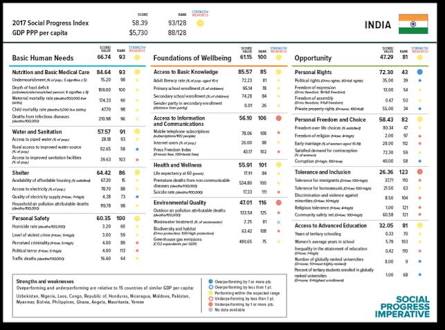 India which is ranked at 93rd position performs within the expected range on a relative basis. It outperforms when compared with countries having similar GDP per capita in providing water and electricity facilities.

The progress is mainly driven by the advancement country has experienced in two components: Shelter and Access to Information and Communication

The liveable conditions have significantly advanced.

Affordable housing is now available to 67 percent of the population as opposed to 42 percent in 2014; there is a 14 percent fall in the deaths due to household air pollution.

On the category of Basic Human Needs, India has seen an advancement.

In addition to this, there has been an increased access to improved water resources and improved sanitation facilities.

Where does India lack behind?

India only shows up in the top 10 for the number of globally ranked universities, for which it is rank 9.

As it can be clearly seen, India needs to work a lot more to improve its social and environmental indicators, despite being one of the fastest economically growing countries in the world.

According to Sudhir Sinha, CEO of CSR Inc, “Although we have succeeded in removing from India some of the social sins such as untouchability, scavenging, child and widow marriages, and Sati Pratha, etc, we have yet to achieve equality, casteless & classless society, and greater & deeper respect for humanity. While, with GDP growth, we are progressing economically, we wrongly assume that we are progressing socially too. No, we are not. The gap between rich and poor has been increasing. Rather, we have degenerated socially on these parameters under the influence of economic progress.”

Overall, it is important for the countries to act on social challenges by designing innovative mechanisms that will help them move towards a more inclusive society.

Nevertheless, improvements made on the front of basic human needs and foundations of wellbeing have resulted in India in getting a slightly higher world ranking on the SPI 2017 compared to last year and hence are very well appreciated.